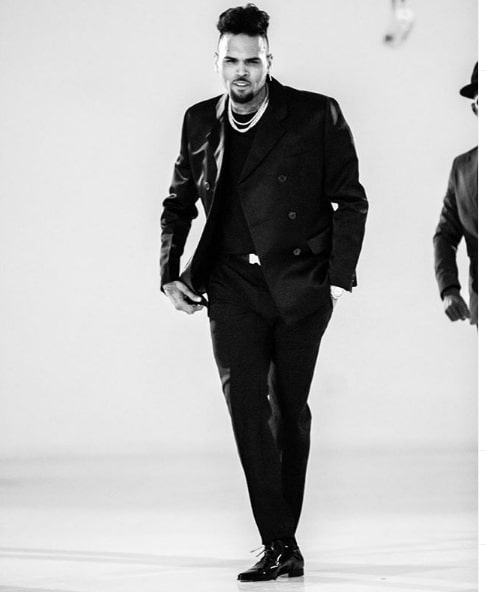 50 Cent shades Michael Jackson(MJ) on Saturday via his Instagram saying Chris Brown is better than the King of Pop. but you will love Chris Brown’s response.

If humans have taught me anything, it is not to be surprised when they talk shit and garbage.

If you are familiar with history and record-keeping, then such claim is lofty.

You and I currently live in a world where everything is decided by stats. and because 50 Cent shades Michael Jackson doesn’t make Chris better.

So if you want to go by taking stats, you would see that Chris Brown would never earn H2H comparison.

Especially because MJ was way better and appealed to people of all races even in death.

Before I go further!

Hey, guys, I am Mone Nuel founder of Shoutmeceleb Entertainment.

An online media company that brings you the best net worth of celebrities, music, videos, and lyrics.

I and my team of idealist have also created something unique for you to benefit while reading our blog post.

So, click on the above link to join the contest now.

Let’s get back in now, shall we?

Michael Jackson Vs Chris Brown Who is The Greatest

I am even ashamed to be writing about this because a vast majority already has the answer.

But hey just read and let’s leave it at that. and forget 50 Cent shading MJ even in death.

I will provide stats because the world is being ruled by statistics these days. I mean this is how you decide how successful a person is in this world.

If you want to make comparisons then it should be based on statistics and not opinions.

Heck opinion and statistics even damn close to being interchanged.

Saying Chris Brown is better than MJ is downright insulting to memory. especially if the person being compared Idolizes his master.

Such is the twist of things if you try to compare a master and his students.

I respect Chris Brown a lot especially after watching him on the song Blow My Mind. with Nigeria rich musician Davido.

The guy is a definition of talent and switching that accent to Pidgin English was nothing short of genius and artistry.

Chris Brown collaboration with Drake on No Guidance is also proof that he is the real deal.

But does this remotely earn him a comparison with MJ?

The short answer is No it doesn’t because you and I know what MJ stood for right?

Even in death where he has been judged several times. because they want to prove that he ain’t a better man, he still leaves on.

How about that for insulting memory?

If you are a celebrity, your life is under a constant microscope 24 hours of the day.

Well, it usually comes as the job of reporters, I mean we would have to make a living right?

Having said that I reckon that MJ may have some flaws. not that I have seen anyone yet.

I know that maybe biased considering I am a huge fan of dead Michael.

But one of the key notes of being a fan is your unwavering support in the face of adversity.

I may be blinded by his Michael Jackson songs to a fault which may be causing me not see. what the world saw in persecuting him time and time again.

Does being a celebrity automatically take away the fact that you are a human being?

Michael Jackson may have his own fair share of his demons. but aren’t we all guilty of something in one way or the other?

Enough of that let’s get into stats and achievements before I tell you about what 50 Cent did.

Listen, guys, I would do this post later on on the topic Michael Jackson and Chris Brown net worth. but for now, let’s make do with what we have.

To add ice on the cake, one is the master of perfection and the other draws inspiration from the master.

Who is the master and who draws inspiration?

Obviously MJ is the master of his craft and Chris Brown draws inspiration from Michael.

I mean you could see the influence MJ has over him in 2010 when he was on stage doing a tribute to MJ.

But if 50 Cent wants to shade anyone come on it shouldn’t be MJ.

The man is a legend and he would always be a legend for even other generation to come.

Assuming you read the articles of the above link, you will understand why MJ is the undisputed greatest.

Why Did 50 Cent Shades Michael Jackson

After watching Chris Brown MJ documentary, in which he replicates Mjs moves. fif thinks Chris automatically earn himself a comparison with the great MJ.

On his Instagram post, 50 Cent said ” I think CB is now better than MJ to me. I can’t even believe he tried to touch those kids booty.

Well, if you want to throw shades around, certainly it won’t be MJ. because his fan base even in death is crazy.

I recall the comment section taking lots of opinion from die hard fans who think it’s disrespectful. to shade MJ when you know how influencial he was to lots of lives.

Heck, my father then doesn’t play anything, not MJ.

No, no human will ever be perfect because in my opinion perfection is another word to become Jesus Christ.

I can’t become Jesus Christ obviously but I can follow the path he did. but not on sacrificing myself to a world that hated him for no cause.

Still on the conversation!

That was a savage response honestly and the reply to his comment more says it all.

Chris Brown also took his time to dig up a little history detailing all of Mjs achievements.

But what does that mean?

It means I Chris Brown am not better than MJ because he’s my mentor. and I drew inspiration from him.

Here is how Chris Brown replied to Fif:

The R&B crooner reminded 50 Cent and his fans that Michael Jackson sold over 1 billion records and received over 800 awards over his illustrious and decorated career. Brown shared a bunch of other achievements MJ received including five living legend titles and 39 Guinness World Records.

Meanwhile, it’s news flash that Chris Brown hits a new career milestone. and he wants to stay completely out of a comparison with MJ.

I believe the reason why 50 Cent shade Michael Jackson is because. he is taking a hit after changing Power theme. so as a way to turn attention from the criticism, he decides to throw in MJ as a scapegoat.

A decision that’s got fans who loves the series to be seriously angered.

Would you say that Chris Brown is better than Michael Jackson?

Leaves a comment below. because I would love to hear thoughts on this.

Also, Join Over 6000 subscribers to take part in the SMC vacation contest now. You can’t be the winner.

Davido and Chris Brown stage performance were lit, unlike nothing I have ever seen before. I know David got some…

Nick Cannon shades P diddy in a recent interview where the 38 years old actor and TV personality. said I'd…