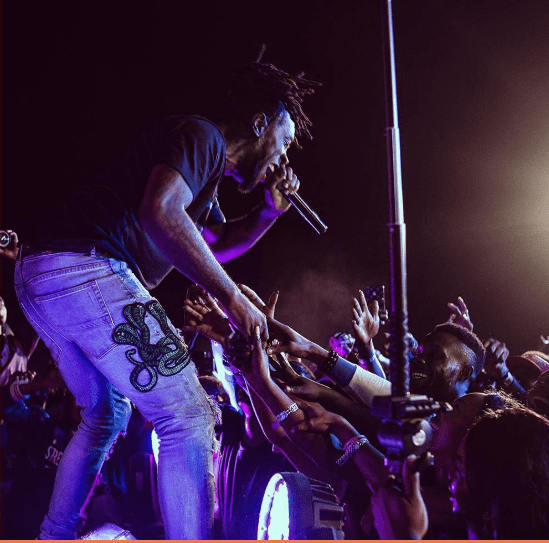 Burna Boy has called on the organizers of Coachella 2019 to fix his name written like a peanut. The singer ‘ on the low ‘ took to his Instagram to stress.

He wrote on his wall ” I am an African Giant and I would not be reduced to whatever that thing on your bill is. Fix this quick ” the Naija popular musician wrote.
On Twitter, Burna Boy tops the tweets in Nigeria with about 65.5K tweets alone. This is because he is one of two African artists that is set to perform in April at the Coachella Valley Music and Arts Festival 2019.
The rapper has been phenomenal in the previous year with his singles. his video on the low dropped on youtube in December has garnered more than 4 million views.
Fans are already predicting the singer for a comfortable swoop of the 2019 HEADIES award. they are not entirely wrong because he had a wonderful year yet we will see what the future holds for self-acclaim Africa Giant.

The history of Coachella and the writing of artist names in bigger and small font is surprising. but if you are one of the many few that did not know this is a tradition then Wikipedia is your best friend.

The organizers always write the names of the prominent stars in big fonts. So if your favorite artist name isn’t on a big font then it only means one thing. that is he isn’t that prominent in the world’s music industry.
It seems the ‘ Smoke Some Weed ‘ singer knows this and as such wrote on INSTA. See the what he said below.

@Coachella i appreciate you but i do not appreciate how my name have been written on your Bill. I am an Africa Giant and I will not be reduced to whatever that is on your bill. Please fix it quick.

It is a tradition within Coachella to write bigger fonts for a more important artist. but this is not to mean that any other artist is less important.
I see this as a business strategy for the sale of Pass and VIP wristbands. Highlighting bigger names like Childish Gambino, Justin Timberlake, and Kanye West will more sales.
Over to you guys!
What is your opinion about Burna Boy calling out to the organizers? Use the comment box to drop your comment and Shoutmeceleb will answer.
Click Here to Like Us on Facebook for Real-time Update and Follow Us on Twitter

Ed Sheeran 2019 Profit from Tour Will Shock You

Ed Sheeran 2018 profit while will leave you speechless. Touring company Nathan cable has revealed that the singer made a…