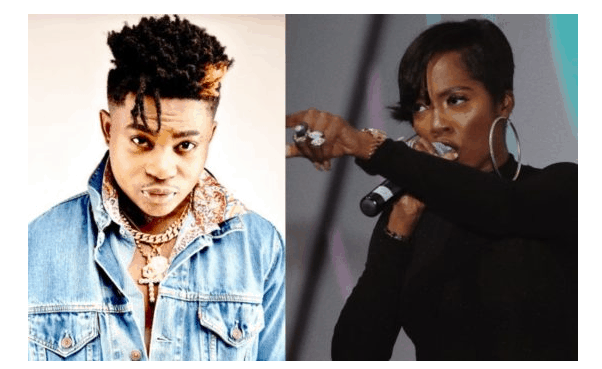 Danny young accuses Tiwa Savage of stealing his song. Mavin and international star Tiwa Savage did not reply to the musician claim. Fans poured out an insult on Danny Young with some saying that the Naija star is no longer doing well in music.

Tiwa Savage was seen in Wizkid fever video but did little as sing. Fans also reacted to that video claiming the 38 years Naija Female musician is too old for Wizkid Shoutmeceleb said.
Her single with Duncan Mighty Lova Lova also made headway in the Music industry. with many favoring the song as the rebirth of Duncan. Although Duncan Mighty voice is legendary, it was Tiwa savage voice that did the magic.
Tiwa’s song featuring Duncan Mighty recorded more than 3 million views on youtube. within a week of release, the song got more than a million views.

Danny accuses Tiwa savage of theft but the popular Jay Z and Beyonce signing refuse to say anything. Danny young claimed that Oju Tiwon was his lyrics used in his 2009 song. The Naija star who has long fallen from stardom. claims he is a victim theft and intellectual property infringement.
Also Read:
These are some pretty strong words which could spell trouble for the 38 years old. Should Danny Young decide to charge the case to court, Tiwa will pay for the damage. Some fans and admires of the Naija female star refuse Danny the claim to a proverb in Yoruba.
One, in particular, said Oju Tiwon is a popular Yoruba proverb so Danny has no right to claim he owns the lyrics. Tiwa currently is one of Nigeria top influencers in the game of music in Nigeria.

Theft and intellectual property infringement obviously a crime in this country. but needless to say that no one has been caught yet even though some Nigerians do use lyrics of an international artist in their songs.
Danny Young accuse of Tiwa savage may be due to his falling from stardom and such he is a desperate man. seeking to find more fame. Do you think Tiwa Savage should respond to Danny Young’s claim? Use the comment box drop your thoughts and Shoutmeceleb will be sure to reply.

Funke Akindele twin babies could not have come at a more better time. The veteran Nigerian female comedy actress gave…

The Agbada Challenge of Ayo Makun movie Merry Men hit the cinema last month. The success of the movie gives…