Davido 250 million Naira donation to orphanage homes breaks the internet yet again and you have to read that again it’s 250,000,000 Naira.

What a man, what a creation, raised privileged but with a heart that transcends gods themselves.

It’s OBO the man with the heart of gold born with a golden spoon but relates to everyone whether poor or rich.

You can’t stop greatness and greatness is in what you do not what you say.

He has done it time and time again and this time he definitely has the whole world talking both friends and foes.

What a day, what a man, this is beyond words and I have to say every good word isn’t enough to give credit to this man whom it’s due.

How It All Started

I need to catch my breath a little but damn that was crazy and totally unexpected from David Adedeji Adeleke.

A couple of days back Davido broke the internet after he jokingly asked friends for money online.

Davido went to Dubai to have a good time and took to social media to catch a cruise like he usually does.

In one of his social media posts, the singer soon to be 29 years old said.

I have been rising by lifting others for the past 100 years and now I want to see those who are my friends.

I need 1 million each from friends and colleagues for my birthday.

This was the genesis of the whole story and just like that, everything changed with waves of money flying around.

The Total Amount Davido Raised From Friends and Family 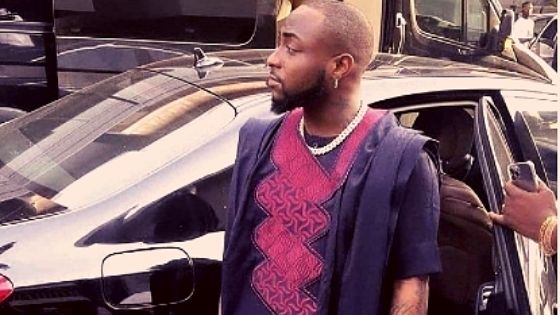 On one of the tracks, Zlatan featured Davido on the song titled Money which is a hit in all regards.

Heck, if you want to check it out then click on the link above to do just that.

Once Zlatan money came through and Davido posted the screenshot on his Instagram story, the game was on.

One by one different celebrities began to send Davido money from Don Jazzy to E-Money, to Jude Engees the brothers of Psquare.

Recommended For You: LENN EP 6: New Video Suggest The Unthinkable With Psquare Brothers

These are just a few names on the list but you get the point.

I have written an article that covered the topic extensively here so you can read about it.

The total amount that Davido received was 200 million Naira which is the equivalent of $400,000.

While on Twitter, he made a post that reads “I just might give it all away” and then announced that there will be a big announcement the following day.

On the beautiful Saturday afternoon at 3 PM to be precise, the singer made the most bizarre announcement.

Main while this came after he released his first single of the year titled Champion Sound featuring South African artist Focalistic. 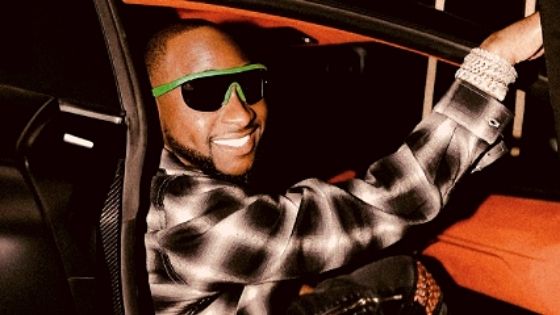 He even released a vibee video to promote the song which got positive reviews from different Music YouTubers.

It also made waves on social media as he hosted a Twitter Space which saw several celebrities including the likes of Wizkid attend the Twitter Space.

As Champion’s sound continued to trend, so was the expectation of what Davido had to say stayed in people’s minds and hearts.

The Day dawn and after I finished watching the Chelsea match which they won 3:0 against Leicester, I came home, took my bath, and decided to check out Instagram.

Lo, and behold I saw Davido’s $400,000 donation to the orphanage announcement hit my Instagram feed and I was speechless.

Here is a screenshot of what the post reads to put it in context for you. 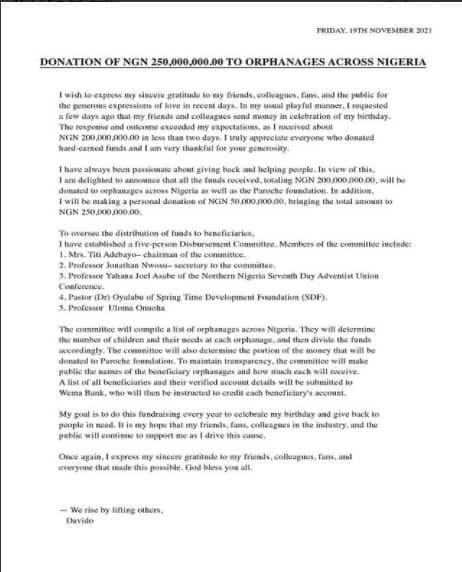 Davido is taking the headline and the way I see it, this is one of the most beautiful times to be alive.

To have artists care this much about people and their suffering in Nigeria has never been seen this much.

You could say he is one of a kind, and some would even opt for words like King, President, and more.

Whatever you choose to call him, he is the man of the people and he deserves his accolades so give it to him.

Having said that, why do you think Davido 250 million Naira donation was to orphanage homes and not his fans?

LENN EP 4: 2face Hired Gangsters To Beat Me Up On Claims I slept With His Wife