Omo baba olowo aka OBO is one of the richest singers in the country with a good international presence.

David Adedeji Adeleke had to come to Naija to take his musical career into another level of dynamism.

So far this has played out well for the 28 years old who was born in Atlanta Georgia.

Today you could say him being one of the richest African musicians didn’t just come by chance.

Davido is product of hard work and talent mixed into a neat and fine human with respect for everyone.

So for the next few minutes let’s see what this post is going to be all about.

Actually you already know what it is about right? it’s about Davido AGT album.

His first album introduced him into the music industry but ever since then, the 28 years old. has gone to conquer Africa and some part of the world. with two album OMO BABA OLOWO and Baddest prior to a good time davido 3rd studio album.

No wonder he is one of the hottest and richest as far as African music is concern today.

I still could remember when the singer released his hit song Aye in 2014. every club and party in Naija only wanted to play that song.

As a matter of fact, my kid sister specifically asked that song be played during her matching in of her marriage.

You and I should now look at some of the album information.

Who are the producers that worked on Davido a good time album?

Here is a List of Davido a good time album tracklist producers.

If you need quality then you probably also need the best producers and mixers to bring that quality to d door.

Having said that let’s quickly look at how many feature the album had right?

How many features does Davido 3rd studio album a good time have?

Here is a list of the a good time album features…

The total numbers of artists featured on Davido a good time album is 9.

With quite a handful of those artists coming from DMW record label artists.

Here is the complete list of features on Adeleke Adedeji 3rd studio album.

Quickly let’s look each of the songs from the album and give you a place to download each song.

Here is the List of songs from a good time Davido album tracklist.

If by Davido is a love song that promises love to a woman or a man.

both songs can be sang by the opposite sex as a love song.

My friend KD used If to profess his love for his woman during his wedding day.

As usual you could imagine the big smile emanating from her lips. mostly because this was one of her favorite songs.

but not just she was a big fan of the 28-year-old who his girlfriend just gave birth to a bouncing baby boy.

Did you know that fall is the song that gave Davido the international presence he needed to breakthrough?

Don’t get me wrong David is already popular in Nigeria but internationally not so much. and Fall changed that narrative forever.

When I watched him perform at the O2 arena, I was like damn this guy is so good.

Fall even best some good songs in UK charts to make a record for Davido.

Fall is also a song that talks about a lady whom Davido wants banana to fall on.

Banana in this context refers to the male reproductive organ.

but if you have never listened Davido Fall Mp3 then, by all means, Click here to download the song now.

Whenever you excel at anything, it’s normal for people to hate you for no reason.

As a matter of fact, it’s human nature to be jealous resentful at someone else’s progress.

I sometimes ask myself why but then the answer came in the form of a 2 years old boy.

You must be wondering what that is and why I probably said that right?

Well, stick with me, because you will find out shortly.

I woke up one early morning only to find my son trying to kill a butterfly.

I couldn’t believe what I was seeing because I am confident I have never taught that kid how to kill something.

There and then I realize jealousy, hatred, wanting to take a life was by default man’s nature.

Davido has gone through all of these only in his case he was being bullied because his father is wealthy.

Fia by Davido is a hit song off his EP a good time and it was one of the most successful of his so far.

I don’t know how to say this but a good time album was really packed with good songs.

I mean the likes of Fia, If, Fall and Assurance all did good numbers on YouTube.

Assurance was made for his girlfriend whom the singer engage in the second half of this year.

With Davido Instagram post telling fans that 2020 will be the year he’s finally going to tie the knot.

This is the song that drove everyone crazy in 2019 because no one was expecting such hit song.

This is because Davido had been left out of Beyonce Knowles Lion King album.

and everyone made it a big deal because but his response was totally crazy.

Because today that song alone broke Nigeria YouTube record for most viewed video. which is a feet previously held by Wizkid.

Chris Brown is just an amazing talent that I don’t even know how to describe his talent.

I mean you need to watch this video below to see how switches to pidgin English like he already. could speak the language from his childhood.

Just like Risky, Blow my mind was carefully crafted for his audience.

and what everyone expected was delivered in a smooth, nice and interesting art.

Funny thing is all this happened without Davido or Chris ever crossing path in their lives before.

It’s music and you have to respect the power it has to connect people in all walks of life.

If there is one thing I love about Davido, it will be the brilliance with which he selected the artist. that will suit the style of song so well.

and that’s just what he did when he contacted Popcaan for this lit song.

Popcaan may not have the fame Davido has yet but the guy is super good because. he tamed his lines like he was suppose to.

Risky was dropped couple of months after blow my was dropped making Davido. one of the 2019 artist with a back to back hit song.

I was on YouTube the previous after Davido a good time album songs was released on YouTube.

I had to go check it out because I haven’t seen it to write anything about it.

I was particularly blown away by Check Am because it was a nice and a very beautiful song.

I quickly brought out my earphone after downloading it to listen to the lyrics and it’s vibes.

I tell you Davido is really talented and I wonder why some persons kept complaining about his voice.

Although one reply to that complain caught my eyes and it was when one African American fan said. I love the raspy, raw and lovely voice of Davido.

Talent can only take you far but hard work plus talent, will make you last longer when talent has done it’s best.

Davido leaving HKN record label could be one of the best decision ever.

Because since leaving HKN music, the success has been impressive.

How would you rate Davido 3rd studio album a good time? 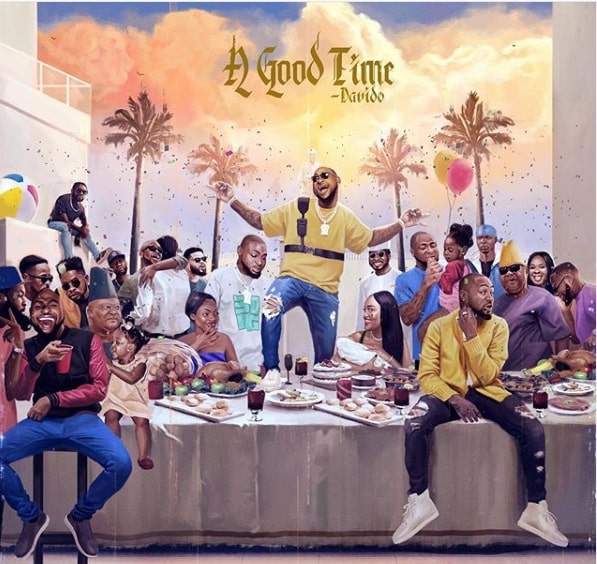