I don’t know about you but the truth remains that legends don’t die.

and believe me, I am thrilled at how 2face has managed to stay relevant even. in a time when the younger ones are taking over.

I believe music becomes a lot harder as you get old because. the other day I was watching Eminem sing and he could barely catch his breath.

Yeah, I know he is 47 before you throw how old he is at my face lolz!

and seeing tuface still relevant in a time when kids are taking over is just beyond me.

but hey you and I, we aren’t here for that right?

2face has released several albums such as Grass to Grace, Ascension and much more.

So in this post, you will be able to get each of 2face warriors album tracks downloaded to your iPhone or Android device.

If it’s PC you are using well that’s even better but I doubt you would be on PC. because almost half of the searches are being conducted on mobile these days.

Anyways 2baba warriors album was released on the 28th of February 2020.

and since it’s release, it’s been trending so hot that I don’t even know how hotter it can get.

For those of you that do not know who 2baba is, he is a Nigerian musician, singer-songwriter.

He rose to fame in the early 2000s with his hit single African Queen.

and in 2019 he celebrated his 20 years in the Nigerian music industry.

This is like 2 decades of hard work and sweat, but it’s glad to look back and see how far one had come.

2baba is also one of the richest musicians in Nigeria today with a net worth running into millions of dollars.

but here is where things get a little interesting!

Did you know that 2baba is not just one of the richest in Naija?

Well, he is also one of the top richest in the whole of Africa which goes in to say a lot about the 1975 born.

Okay now that you have all of these facts, now let’s get into the list of tracks from 2face warriors album, shall we?

For the sake of this post, I will be touching each of the tracks briefly like in the form of an overview.

Then I will provide you with a link where you can download it here.

Attention: I won’t follow the track serially as it can be found on the 2face warriors album cover.

So here is the 2face warriors album full tracklist below…

We Must Groove Featuring Burna Boy

We must groove is more for people that love to enjoy life and the feature of Burna was an added bonus.

So if you know you are all about enjoying to the fullest then download the We must groove track here.

Wizkid is a genius when it comes to music and I know some of you are a huge fan.

and the fact that 2face got him on this track is definitely a brilliant choice.

Okay, the truth is no one does Tiwa like Tiwa, so I totally understand why she was featured.

and guess what despite not being around, she literally brought it hot on this track…

If you are her fan then you need to listen to this track because it’s a wonderful one.

I Dey Hear Everything Featuring Olamide

This one is another hit song and Olamide just the rest of others turned on the hit.

As a matter of fact, I can say he almost gave 2baba a run for his money.

Having said that, you can download the song here today.

After coming on so hot for Mr. P on the song one more night, I think Frenemies was fire because of her.

She literally dissects each of the lines without holding anything back.

Overall her presence in the song made it extra nice you know.

I love the swag and everything within it…

I love the political rhythm this song had and I felt like if other. artists speak more things could get a little better.

but hey notice the keyword could get better in this above sentence?

It’s a 50-50 percent chance, so technically it may work or it may not.

Peruzzi has been on fire since getting discovered by 2face.

As a matter of fact, Davido said this guy is the best thing that’s ever happened to my career.

You could see there is a lot of mutual respect going on.

And tuba made the right call featuring him on his warrior album.

If you haven’t got the chance to listen to this track then I don’t know what you are waiting for right?

I, in particular, enjoyed this track but it may not be the same for you.

and the real question becomes how would you know this?

Well, it’s by downloading it through here…

I in particular like the rhythm this one took, rough, gringy and spooky.

but it was overall a very nice song and you would be missing if you didn’t listen to it.

You wouldn’t want that now, would you? 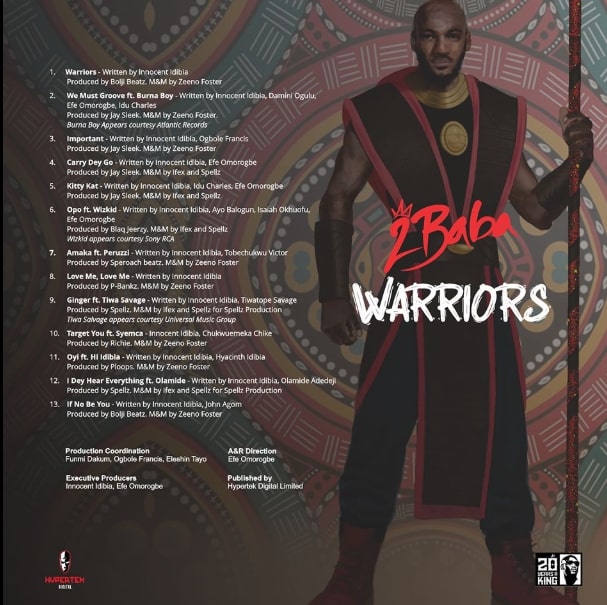 This is the first track of 2face Idibia warrior album 2020 and guesses what?

This track act as the introduction and centers around where the singer is right now in his life journey.

Stream, download it and enjoy it it’s your last supper…

2face features his kid brother in Oyi, the rhythm of the song makes it. Possible for anyone to follow the flow.


Plus if you wish to listen to this song then you can download it here.

Most of us probably don’t know Syemca but damn his hook on this track is just on another level.

Target you is a love song and one I really love from the full warriors album.

You can download it by clicking here so enjoy it…

2baba is a wonderful guy that I admire and all of these tracks are just amazing.

but I would love to hear from you!

How would you rate Tuface Warriors album and which is your most favorite track? 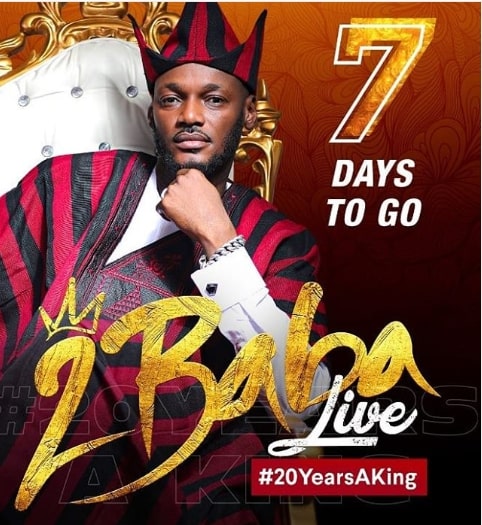