Published by Shoutmeceleb Entertainment on 12:55 pm 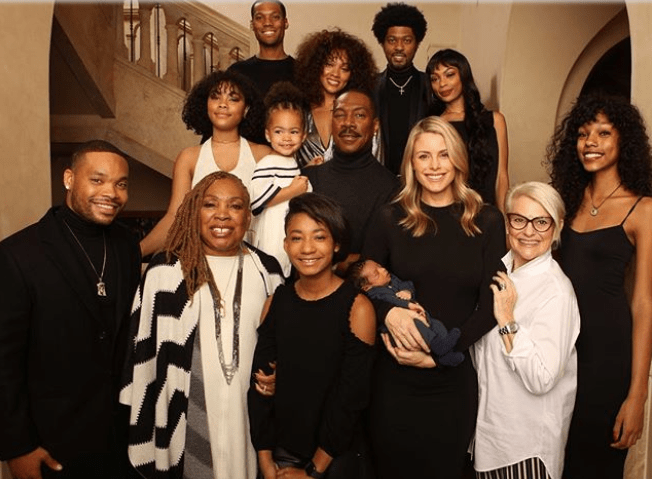 In Bria’s photo, Eddie Murphy Family were with the brightest of a smile. It was also Eric’s first time of being seen in a public photo. Eddie carried his 2 years old daughter, Paige Murphy in the photo carried Charles 2 weeks old.
Eddy shared a wonderful Xmas with his family. All his kids which totaled 10 were present to celebrate the day with him in love and styles.
Also Read:
[bctt tweet=”The 57 years old actor and comedian, sent a twitter to a meltdown with his never-aging looks. He last surface in the movie Mr. church and that was back in in 2016. Ever since then 1988 coming to America star have been on the low.” username=”valeriewhite775″]
Mel B, America Got Talent Judge who recently had an accident which results to broken ribs. said Eddie Murphy is a very caring, loving and respectful person.
Mel and Eddy Murphy dated for just 10 months before they separated. and Mel B while on Steve Harvey’s show said ” We did not leave on the best of circumstances ” but he loves Angel.
Angel is Eddie’s daughter and the two have been spending some quality time together. Mel is still recovering from her Injury but Murphy’s family are having fun together with exes.
Eddy Murphy paid around $51,000 every month as child support to his ex Mel B. Yet he is becoming closer to his daughter. Us magazine said Angel is being well cared for in hope of Mel’s recovery.

Eddy Murphy Kids According to Ages

firstly, how many children does Eddie Murphy have?
[bctt tweet=”well, he has 10 kids from all his relationships. below is the list of his kid from the youngest to the oldest. Eddie Murphy children’s names are;” username=”valeriewhite775″]
Eddie Murphy’s net worth stood at $85 million with his famous movie 48hrs. The actor dated quite a handful of women of women fathering 10 children in the process.
Murphy’s ex-wife Nicole Mitchel gave birth to Bella Zahra, Zola Ivy, Shayne Audra, Bria, and son Miles Mitchell. before the two later called it to quit. He is in a relationship with Paige Butcher and she has given him a daughter and a son.
He also has one son Paullete McNeely and a daughter with Tamara Hood Johnson. They were all in the Xmas photo with Mel B absent as a result of her recovery.

Eddy Murphy and his kids looked lovely together. some of Eddie Murphy movies includes Beverly Hill Cops, Norbit, Shrek, Life, trading places among others. He has had a blistering career both as a director and a producer.

Over to You Guys!
How old do you think Murphy’s little boy is? use the comment box to drop your answers.

Mel B accident has been ruled not to have been caused by alcohol. The 43 years old was hospitalized after…

Nicki Minaj love for Kenneth Zoo Petty may be the real deal. The American rapper, model and songwriter is crazy with love…