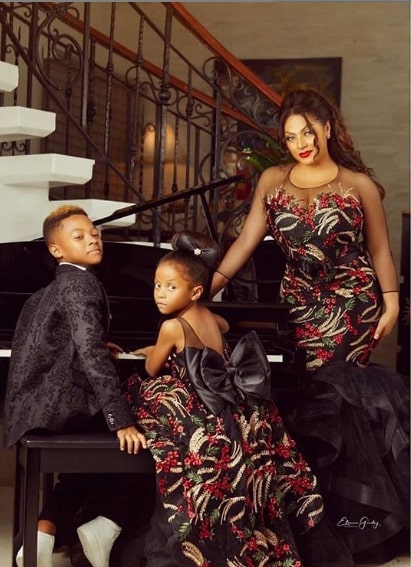 Mr P Wife and Kids is the reason he broke bonds with his twin brother. Rudeboy Paul Okoye and Jude Okoye. I will choose my family over them he said.

But it stands to reason that I feel why can’t he jus of having both.

Rich people think both according to T Harv Eker. I.e rather than choosing one side why not think of having both sides.

I am sitting here wondering Why not choose to be the ambassador that brings the two sides together. rather than having one side of it all.

I will stand up for my family but if there is a window where I can have both. then, I will gladly have both.

Mr P Wife and Kids can be happy with the family if Peter chooses it.

Here is a quick question for you

Mr P Wife and Kids or Rudeboy Wife Kids which of them do you love better?

Use the comment box to join this conversation and like I always say I love interactive sessions.

and do you know notice that the brothers are competing?

I mean Mr P One More Night ft Niniola dropped and few weeks after Rudeboy Reason with Me also dropped.

Not to also forget to mention that they were both listed as richest artists in the country.

This is just my opinion though! I did a very close study on how they have been dropping their singles.

If Mr P single airs today Rudeboy single will air a week or two after and I felt like why not bring to your notice. and maybe you can add something.

Why Mr P Wife and Kids Feels like an Excuse

Honestly, I think Mr P Wife and Kids are the excuses he uses to run away from reality. No offense but I am a fan of standing by family.

I like to put it to you that Peter Okoye wife and Kids are just the excuses he uses. as a guide to not settle his misunderstanding with his brothers.

Yes, the older brother Jude may have a bigger role to play, but heck look at these two(Peter and Paul). They won the heart of fans all over the world.

Rather than making excuses why not address the problem the way it is.

Personally, I feel it goes beyond just Wife and Kids but if the reason you are breaking up with your twin.

Davido and Wizkid net worth 2019: Who is Richer

is because you are choosing to side with your immediate family I respect that but just what if you could reconcile this beef. and give your kids the opportunity to not hold a grudge.

It’s one thing to be happy but it’s another to be truly happy.

I didn’t understand what she meant until I grew up to become a man.

What she was trying to say is this:

Many a time we argue that it is easier said than done. but the reality is man’s pride will always get in the way of doing what is right.

Tackling this pride becomes an issue. Most especially if you do not know how to tweak your mind to support what is right.

But the real question becomes!

How do you tackle pride and let it go? I am no pastor but I know that the first place to start is identifying that you have pride.

Once you are able to do that then here’s a guide on how to tackle pride so it does not destroy your life.

The Harm This Hate Could Cause Mr P Wife and Kids

Mr. P Wife and Kids could be in harm’s way not necessarily anyone doing anything to them. but the wife and kids of Mr P could suffer emotional harm due to this rift.

Let me explain with this example:

Imagine you have a wife and two kids who can’t go to your younger brothers house. because you two are not in talking term.

Now, what does this do to your kids?

You reaped them of the joy of being with family. and the chances are when your kids grow up, they will continue what you started.

Now, imagine as kids growing up, your kids meet with your brothers. and they could not even hug and make up because you have sown a negative seed already.

Now apply this same example I just gave you to what is currently happening in the Okoye’s family.

You will realize how easy it is to create an entire generation of hateful kids just because of pride.

I did not make this post to pick on one side of Peter and Paul. but to address you Mr P and Rudeboy.

Chances are you won’t see this post but if my audience love you guys enough to share this post. then I hope you would realize that you are creating a generation of hateful kids if you two can’t man up to face and resolve your problems.

If you can’t love each other even in a war then how do you expect each of your wives to treat one another. I bet Mr P’s  Wife would see Rudeboy’s wife and be like “She doesn’t exist in my world “ 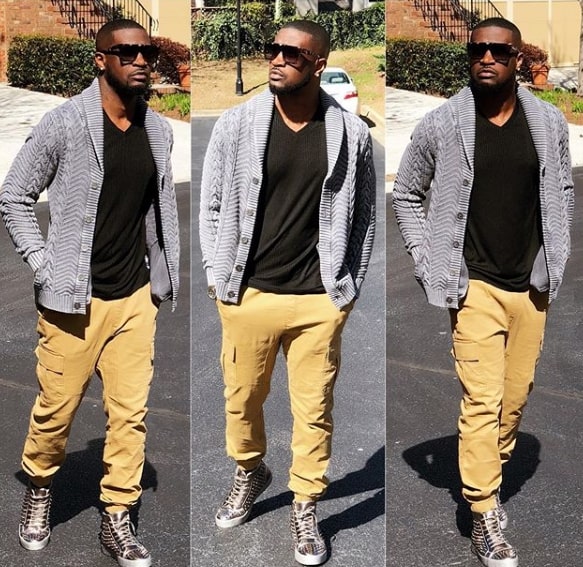 Why, because Rudeboy and Mr. P are two little baby puppies that rather wag their tail between their legs. and run away from the harsh truth.

Which is “Mr P Wife and Kids vs Rudeboy wife and kids will be stories media will continue to publish”  thereby bringing your kids to harm’s way with the childishness.

Yes, you may argue how does this beef bring my kids to harm’s way?

Emotionally I will tell you, dealing with the public. being branded sons and daughters of two Nigerian great twin musicians that can’t put out their pride and hug it up.

How’s that for having money and fame?

The Story of Peter Wife and Kids

Mr P married Lola Omotayo after his mother passed on. deliberately ignoring the advice of the mother before she joined the land of the dead.

Write that down somewhere will you!

Mr P first son is Cameron Okoye a boy who is both a dancer and a footballer.

He is the one dancing in this video below:

. LoLolz that’s a joke but you need to watch Cameron play football, he is like Cristiano Ronaldo’s son.

I mean they are both celebs adored by the world. and one of the key advantages of being a celebrity is that you can make friends easily.

Peter and Lola Omotayo Okoye had their second baby Aliona. She is a princess by the way.

I always think that standing up for family is good most especially because if not you then who!

However, Mr is using his wife and Kids as an excuse to address his immediate problems. and deliberately ignoring the damage this lone act could cause.

I urge Mr P and Rude boy to think about their family, the bond between brothers and make up for their wife and Kids.

Naira Marley arrest update could mean EFCC and government are busy fighting cybercrime. but is he guilty of the crimes?…

Ruggedman vs Naira Marley beef is trending in Nigeria. because it addresses issues of Yahoo Boys as Simi and Adekunle…