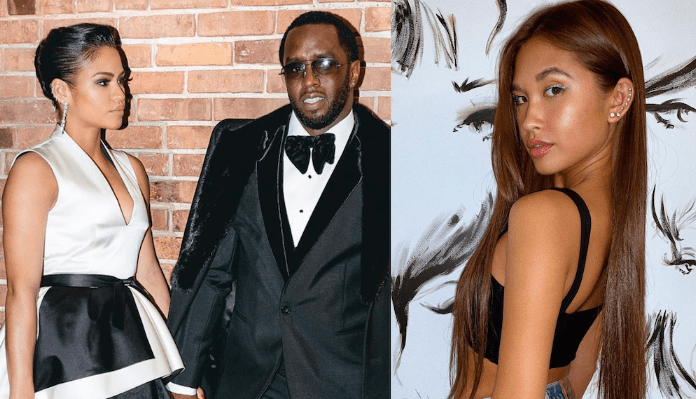 Diddys new girlfriend Jocelyn Chew has recently been the headline. puff daddy was seen in Miami with the 26 years old model and even at Drakes Staples Center Show in Los Angeles.

You may have noticed that Diddy and Cassie have been extra lowkey lately. well, that’s because their relationship is on hiatus and it’s all because Diddy has a new lady in his life.
Also Read:
Sources only tell lovebscott.com that Diddy has been quietly kicking it with 26-year-old model Jocelyn Chew. Cassie’s rep has confirmed that she and Diddy are no longer together.
back in 2015, Pdiddy was allegedly dating Gina Huynh. This lead to the breakup between Diddy and Cassie which they later came back together.
Gina’s still around and was seen together with puffy recently. Diddy’s new girlfriend is also the reason Cassie is splitting from her man. She is currently into Alex Fine a Fitness guru and was kissing the gym star in a Twitter post.
If you notice, Cassie unfollowed everyone on Instagram except for one account…and it’s not Diddy’s. Her split from Diddy could also explain why she’s been going so hard for this Fashion Nova promo as of late. But we’re not mad!
Diddy’s not the type to let women go. and we hear he’s still very much interested in continuing his 10-year relationship with Cassie.

Diddys new girlfriend Jocelyn is quite the beauty but it is too early to tell if the two have anything solid going on. We know the rapper for his love for women and not letting them off the hook.
Some of his exes include recently deceased Kim Potter, Sarah, Misa Hylton, Gina. The latter is a rumor to have been the reason Diddy and Cassie split in 2015.
over to you guys!
What do you think about puff diddy new girlfriend? Use the comment box to drop your opinion. Shoutmeceleb.com will be sure to respond.

Allegation- R kelly Rape Aaliyah When She was 15

R Kelly rape Aaliyah, would you believe that? well, one can believe anything these days. provided the media spins it…

3 Reasons Why Diddy and Cassie Split Love is the Shocker

Diddy and Cassie split have taken lots of fans by surprise. but then again is it a surprise per se?…