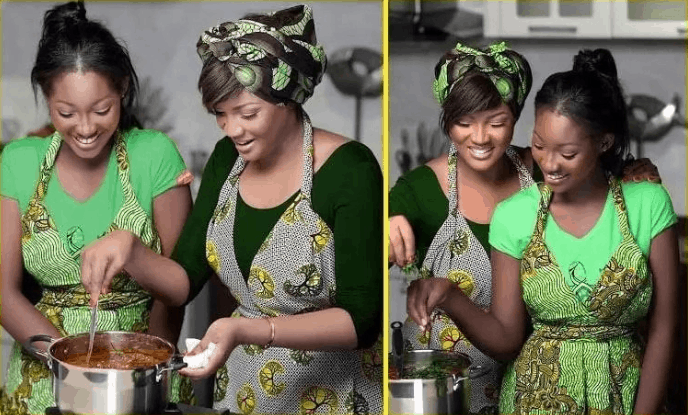 Omotola Jalade Ekeinde is a Nigerian and Nollywood actress. She used to be a model and have acted in well over 250 movies in Nigeria.

Omotola and her daughter Meraiah both cooking in the kitchen

Source: [Legit.ng]
The Nigeria celebrity star and actor was recently in an interview with Sunday Scoop. On the interview, Omotola Jalade was asked if women should be president.
Her reply is the obvious truth. she said, ” Women can do almost everything a man can do”. She further stated that women like her are now more productive than the males in society.
Although Naija males will pick offense to her comments, it stands to reason that she is right. Women can be the president of Nigeria provided it is in a free and fair election.
The 40 years old and born in the year 1978, feels that young people should rule. She also said that it is okay to vote who we want as president of the country.
Also Read:
but that when voting for the young aspirants, their background and track records are checked. This is to learn about the aspirant and propel a competent presidential candidate.

When asked about the upcoming 2019 general election, she said that it is time for females to be president. Nigeria is a country that has never been ruled by a female before.
Recall since the time of independence, all Nigeria president both past and present are males. May it is time for a change but when that will happen we do not know.
1960 Nigeria gained independence and became a republic in 1963. Her first president was Thomas Umunnakwe Aguiyi-Ironsi was a Nigerian Igbo political figure. He served as the President of Nigeria from January 16, 1966, until he was overthrown and killed in a coup on July 29, 1966.
President Olusegun Obasanjo popularly known as OBJ was ruled both as a military president and a civilian. He ruled as a military president for 3 years between 1976 and 1979.
He also ruled as a civilian president between 1999 to 2007 after which he drops as president. He is known for bringing GSM to the country and for other heroics in the Africa continent.

The Actress Husband and Children

The mother of 4 kids expresses her joy over the young generation partaking in politics. Though this is a credible step because it marks an era of the younger generation. coming together with the older generation to propel the affairs of the country.
The names of Omotola 4 children are Mathew Jr, Meraiah, Princess and Micheal. The oldest of her 4 kids is Princess 21 years old followed by M.J 20, Meraiah is 18 and Micheal 16 years old.
Her husband is a pilot and the father of all her kids. The two got married in 1996 on her way to fame. Her husband’s name is Mathew Ekeinde.

Her speech about a female becoming president is well-timed because the women can pick up the courage. and get involved with politics of the country.
I also believe that politics can be played by both men and women alike. Omotola presidential speech may be all that is needed to start working towards a better country.
So it is over to you!
What do you think about her presidential speech? use the comment box to drop your opinion.
Click Here to Like Us on Facebook for Realtime Update and Follow Us on Twitter
Tweet
Share
0 Shares