Published by Shoutmeceleb Entertainment on 9:30 am9:30 am

After her singles with Duncan Mighty who also had an amazing year in 2018. He was featured in more than 6 songs after Wizkid decided to do a collabo with him.

On match 2nd 2019, she struck a deal with Universal Music Group. Many had felt this will cause a sour taste between her and the Mavin boss who is the number 3rd on the list of top 10 richest artists in Nigeria.

Fortunately, it was far from what the world may have expected. Recall that Tiwa Savage has a son right?

Even before she told Don J he had already made plans for the queen to go off and have a baby. without it compromising her career. The name of her son is Jamil Balogun.

Tiwa recently revealed that in her warm Tweet on why she was leaving Mavin. 7 years have gone by since she joined Mavin Records in 2012.

Thankfully, it is a big deal and under Don J Tiwa dropped 2 albums which are:

During this time she has had several singles all making a hit. Here are some of her singles.

As you may have known, she did backup for some pretty high profile musicians. like Mary J-Blige and Kelly Clarkson.

Here is the list of Tiwa Savage Back up Vocals:

Other than these, she also wrote songs for the likes of Kat Du Luna, Fantasia Barrino Mya, Jacko, and Monica.

The NigeriaFinder also records her doing a background Vocals for Whitney Houston in 2009.

Her Deal with Roc Nation makes her the African to have signed to JayZ record label.

How old is Tiwa Savage

Tiwa Savage is 39 years old. She was born in Ikeja in Lagos State. she is a songwriter, singer, and dancer.

So many have been asking who is the oldest between Tiwa Savage and Wizkid.

Tiwa Savage is the oldest between the two Nigerian musicians. She holds an age difference of 10 years on Wizkid. Starboy is 29 years of age currently.

What is the name of Tiwa Savage New record label

Tiwa Savage new record label is Universal music group which is a subsidiary of Vivendi.

here is a brief history according to Wikipedia

Universal Music was once the record company attached to film studio Universal Pictures. 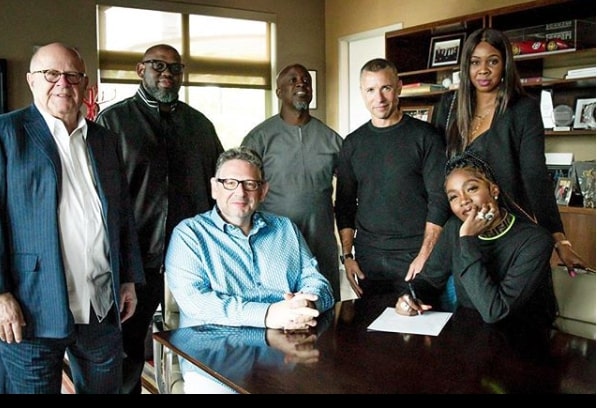 Tiwa Savage has left Mavin records after signing for UMG early hours of today. It is no surprise that the boss of Mavin Records took to his Instagram account to wish her well.

“Your jersey as the first lady of Mavin will forever be yours as we do not intend to fill that position with anyone else. We love you from the bottom of our hearts and pray God’s blessings to continue to follow you.”

Tiwa Savage left Mavin Records because he signed a new deal with Universal Music Group(UMG). It is the same group that boosted the likes of Rihanna & Taylor Swift.

In Tiwas words, she left Mavin Records because she wishes to make Don Jazzy even more proud. It sounds very touching to see the Mavin Queen go.

However, it was Don Jazzy’s love and Instagram handle that made it more lovely. his words according to Daily Post reads:

Confirming the development, Don Jazzy in a farewell message on his Instagram handle. thanked Tiwa Savage for an amazing seven years with the label.

He wrote, “Our darling Tiwatope. We at Mavin would like to say a very big thank you for being such an inspiration to us all, a friend, a sister.

“It’s been a wonderful journey with you and we are very proud of what we have achieved together.

As you start this new chapter in your life. we want you to know that we are behind you and can’t wait for the world to see what we have always believed you can be.

Who will produce Tiwa savage in her new Record Label

The Mavin Queen will be produced by Efe Ogbeni and Vanessa Ogbonna.

According to the deal signed with UMG Tiwa new producer is Ogbeni. the queen has been awesome so far and Nigerians are waiting to see what the future holds.

Tiwa savage new record label signing to Universal Music Group has been the talk all around Africa. UMG has boosted some well-known stars like Rihanna and some other elites name in the US music industry.

I believe the country is happy but the happiest person is don jazzy. He produced and manage Tiwa Savage for 7 years after she signed in 2012.

What do you think about Tiwa Savage New Record Label signing? should she have stayed with Mavin Record?

Use the comment box to drop your thoughts and remember #Weareone #Maketheworldabetterplace #SMC #ShoutnecelebEntertainment.

Ruggedman vs Naira Marley beef is trending in Nigeria. because it addresses issues of Yahoo Boys as Simi and Adekunle…

Tekno Nigerian musician had a damaged vocal in 2018. Famed for his songs and the love from fans, he called…