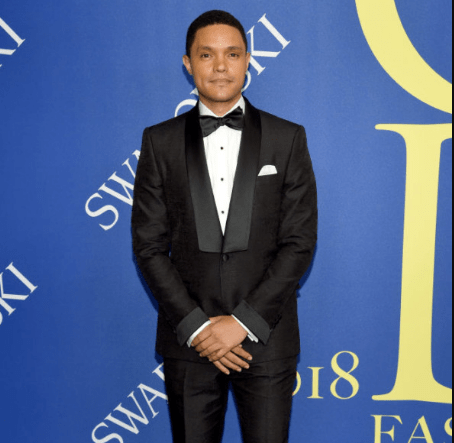 Trevor Noah who is a South African comedian canceled all appointments for this year. This is due to having damaged his vocal cord. It is a painful situation considering lots of folks out there would want to see him on stage.

Trevor Noah who recently released a film that centered on his life story as a child. The movie is titled Son Of Patricia. It tells the story of Apartheid in South Africa and how his mother would let go of his hands on seeing a cop.
Apartheid in South Africa then forbids inter-racial marriage. Trevor Noah became a seed that was formed due to his mother and father interracial marriage.
Source: Lindaikejisblog

Hi everyone, as you will know when you watch the daily show tonight, I do not have a voice right now. I thought my vocal cords were healed. but according to my doctor flying 36 hours and hosting a giant concert South Africa did not help me.
So, now if i want to get better i have to take it seriously so i can perform better at 100% in my tour next year. I hate cancelling shows but i also hate the idea of losing my vice forever. so am cancelling all this years stand up shows and working hard on rehabbing my voice.
I will be like the Rock but in a voice gym. Thank you again for the love and support. I appreciate you.

Trevor Noah little appreciate got fans to wish him well on recovery. Some say that they can’t wait for the iconic comedian to be back on the Daily Shows. Watch Trevor Noah Film Son of Patricia on Netflix.

The Iconic comedian has been a battling his vocal cord ailment for quite some time now. Fans expect nothing short of an absolute recovery for the comedian.
What do you think is the cause of Trevor Noah battling vocal cord ailment? Use the comment box to communicate your thoughts.
Tweet
Share
0 Shares
Categories: World Celebs
Tags: Trevor Noah