Will Smith as Aladdin Genie in 2019 Movie is Creepy 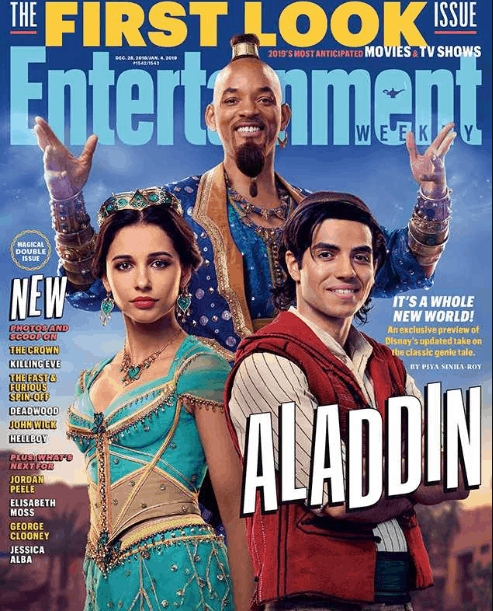 The decision to cast Will Smith as Aladdin genie may have been a bad choice of a movie role. Fans reacted on Twitter after Will Smith photo surface on Entertainment weekly as the new Aladdin genie in upcoming 2019 movie. Some of the comment may quite be negative and funny, but just maybe that is what it needs to be a success.

Aladdin movie was the first released in November 25th, 1992 and it was quite scintillating how the movie turned out in the US box office. the movie was nominated for 5 Oscar and won two of those awards.

The 2019 Alladin cast sees Mena Massoud as the lead character along Will Smith. Naomi Scott, Marwan Kenzari, Navid Negahban, Nasim Pedrad, Billy Magnussen and Numan Ascar.
Mena Massoud revealed that Will Smith as Aladdin genie will certainly wow the fans but that may not be it. Fans reaction took a negative spiral after the photo of Will Smith as Aladdin genie took a negative hit. but the American actor Will Smith asked fans to stay calm.
Mena Massoud had to take some lessons for his new roles such as scuba diving, dancing and even riding a camel. Predrad in his words thinks Jasmine may have evolved. because she isn’t looking to be a girl who just needs love. Jasmine is a leader in her role and I admire that about the character he said.

What Fans May Expect From Will Smith Cast as Aladdin Genie

The fan will be expecting Will Smith born September 25th, 1968 to bring his energy to the movie. Anything short of his best may be a disaster considering the reaction that turned up on twitter.
In 2007 Will Smith was named Hollywood most powerful actor and he has been living to the standard all his years. Although Will Smith worse movie ever made broke the internet years back, he has always been one of the best Hollywood.

Will Smith cast as Aladdin genie may have provoked a negative reaction from fans, but it does not dispute the fact that he is world class. Will’s movie Bad Boys and Men in Black production did well on the screen so fans will want nothing short of awesome.
Over to you guys!
What is your opinion about Will Smith cast as Aladdin Genie? use the comment box to drop your thoughts.
Tweet
Share5
5 Shares